Wild Magic
Young Daine's knack with horses gets her a job helping the royal horsemistress drive a herd of ponies to Tortall. It soon becomes clear that Daine's talent, despite her struggles to hide it, is downright magical. Horses and other animals not only obey the mysterious girl, they come to her and seem to listen to her words. But Daine will have to learn to trust humans before she can come to terms with her powers, her past, and herself.

Set in Tortall during the reign of King Jonathan III and Queen Thayat, Wild Magic is the first book of The Immortals series, which chronicles the time when the world is invaded by immortal creatures and a girl is born with a magical gift that could restore the very balance of nature. 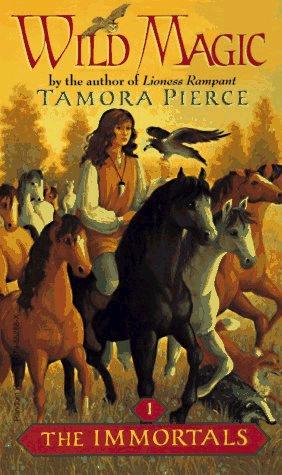 Wolf Speaker
When humans start cutting down trees and digging holes in peaceful Dunlath Valley, the wolves know that something is wrong. They send a messenger to the only human who will listen -Daine, a fourteen-year-old girl with the unpredictable power of wild magic. Daine and her closest companions heed the wolves' cry for help. But the challenge they are about to face in the valley is greater than they can possibly imagine.

Set in Tortall during the reign of King Jonathan the III and Queen Thayet, Wolf-Speaker is the second book in The Immortals series, which chronicles the time when the world is invaded by immortal creatures and a girl is born with the magical gift that could restore the very balance of nature. 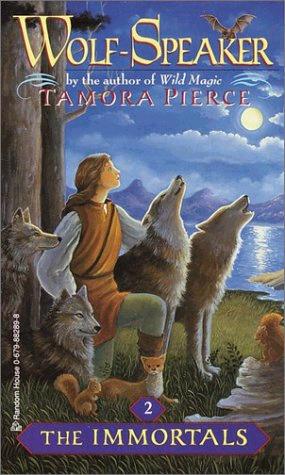 Emperor Mage
Daine sails to Carthak as part of a peace treaty dlegation from Tortall. There, she is amazed by strange and wonderous sights, including rooms filled with dinosaur bones, and the Emperor's zoo. But she also senses a darkness beneath all that gold and glitter, a darkness that lies in wait. At the same time, Daine is discovering that her own wild magic is growing again, this time giving her powers both great and terrifying.

Emperor Mage is the third book in The Immortals series, which chronicles a time when the world is invaded by immortal creatures and a girl is born with a magical gift that could restore the very balance of nature. 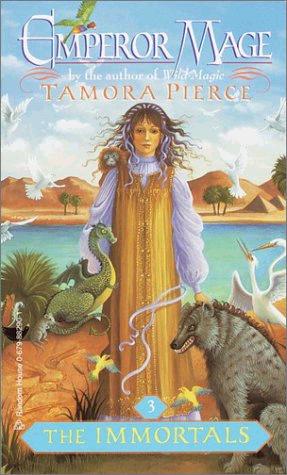 The Realms of the Gods

Daine and the mage Numair are faced with certain death when they are suddenly sweptinto the mystical realms of the gods, where Daine learns the secrets of her past. But she and Numair are both needed in the mortal world to help fihgt the desperate war that is raging in Tortall. And so they undertake the journey home -a dangerous journey that will teach them about life and about each other. Their path leads them to a final clash, which involves both mortals and immortals -a battle in which the only chance for Tortall's future lies with Daine and her wild magic.

Set in Tortall during the reign of King Jonathan the III and Queen Thayet, The Realms of the Gods is the final book in The Immortals series, which chronicles a time when the world is invaded by immortal creatures. 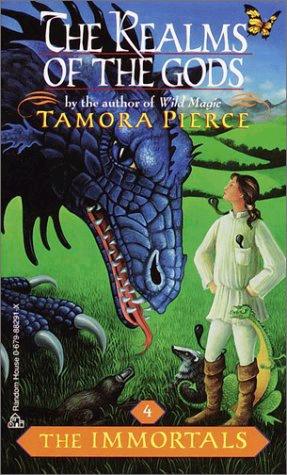 who she is: A girl from Snowsdale who has the strongest Wild Magic in Tortall, perhaps the world.
how she looks: brown curly hair, gray eyes, short.
nicknames: Dain is her nickname, her full name is Varalidain, magelet, the wild mage.h
family: her family were killed by bandits, she ans Cloud were the only survivors, her mother ands up being a god(the green lady), her father is the hunter god, weiryn. she is married to numair and they have 2 children, Saralyn and Rikash.
talents: she is perfect at shooting bow and arrow.
traits: stubborn.
interesting facts: 1. she actually fought for the stormwings right to stay in the mortals realm. 2. she went crazy and lived with wolfs for a year after her family died.

who he is: the greatest mage in all Tortall.
how he looks: black long hair, long nose, big/tall build- very tall.
nicknames: stork man, I think each of dain's animals gives him a different, that's the only one I remember.
family: we don't hear about any of his family.
talents: what not? his gift is very strong and he can do practically evry magic.
traits: very protectiv of dain.
interesting facts: he escaped carthak's jales, and in his first years in tortall he lived on the streets and didn't use his gift because he was afraid Ozorn would find him.