Alanna of Trebond is no ordinary girl- her dream is to become a knight. So she disguises herself as a boy and begins training at the palace of King Roald. Alanna quickly finds out that the road to knighthood is not an easy one, but her skills and stubborness help her become friends with Prince Jonathan and his followers. At the same time, Alanna makes an enemy of the Prince's uncle, the overly charming Duke Roger.

Here begins Alanna's first adventure- one that will lead not only to the fullfillment of her dreams but to a magical destiny that will make her a legend. 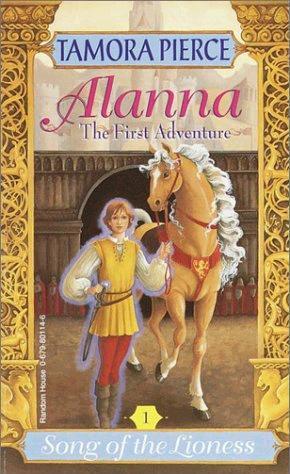 In the Hand of the Goddess

Disguised as a boy, Alanna of Trebond becomes a squire- to none other than the prince of the realm. But Prince Jonathan is much more to Alanna; he is her ally, her best friend, and one of the few that know that she's really a girl. Now it will take all of Alanna's awesome skill strength, and growing magical powers to protect him from the mysterious evil sorcerer who is bent on his destruction- and her's!

Here continues the story of Alanna, a young woman bound for glory who is willing to fight enormous odds for what she believes in. 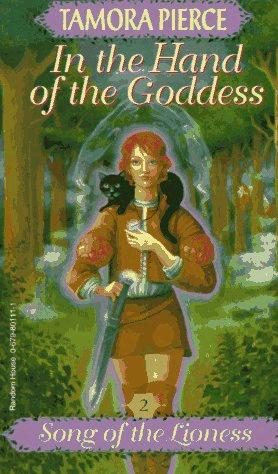 A knight at last, Alanna of Trebond heads out to seek adventure in the desert of Tortall. Captured by desert tribesmen, she is forced to prove herself in a magical duel to the death. But her real challenge doesn't come until after she wins. As the first female shaman, Alanna must fight to change the ancient traditions of the stubborn desert tribes- for thier own sake and for the sake of all Tortall.

The third book in the Song of the Liones quartet continues Alanna's saga as she strikes out alone and discovers herself anew. 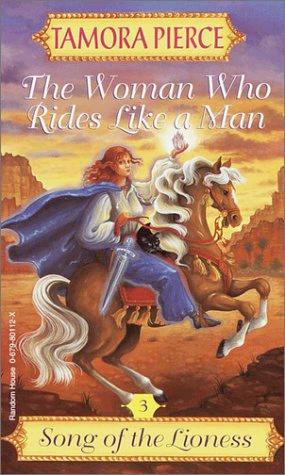 At last, Alanna of Trebond has become the first female knight errant in Tortall. She sets out on an immpossible quest to find the Dominion Jewel, a legendary gem that, in the right hands, has limitless power for good. But while she searches for the one thing that can save her war-torn country, her nemesis returns from the dead and begins to wreak havoc. Only Alanna has the power to prevent Tortall's utter destruction...

In this final verse of the Song of the Lioness quartet, Alanna grows from herione into legend. 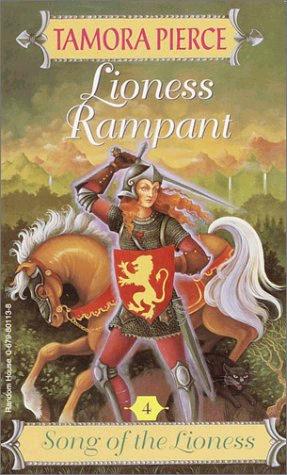 who she is: A girl who disguises herself as a boy for 8 years and is now a knight of Tortall.
how she looks: red hair, purple eyes, short, thin.
nicknames: Alan(people called her that without knowing it wasn't her name), lioness, kitten.
family: her mother died giving birth to her and thom, her father didn't care about her, Myles is her step father, she got married with goerge cooper and they have 3 children.
talents: she is good with a sword.
traits: stubborn.
Interesting Facts:She lived for eight years disguised as a boy. She and prince Jonathan used to be lovers. She is the Kings Champion

who he is: The King of Tortall
how he looks: tall, black hair, blue eyes, handsome.
nicknames: jon, jonny
family: his arents were king Roald and queen Lianne, duke Roger is his coasin, thayat is his wife and they have 5 kids, Roald, Kally, Liam, Lianne and Jasson.
talents: he is a good king, and a knight. he is a good sorcerer and the Voice of the Tribes.
traits: he has a big big ego. too big.
interesting facts: he and allana used to be lovers and they almost got married, Alanna was his squire.

who he is: Knight, Prime Minister of Tortall.
how he looks: very big/tall, brown hair.
nicknames: Gary is his nickname, his full name is Gareth of Naxen.
family: duke gareth of Naxen the elder was his father,
talents: good knight.
traits: has a sense of humore, find's something funny about everything.
interesting facts: gary thought her being a girl and learning knighthood was funny. he laughed and laughed.


want to say something about the site?
contact us at: Rachelligresser@yahoo.co.uk
or you could comment at the bottom of the page.